is the perfect Wordle starting word, as far as I know.

If you’ve ever gone online in the past six months, chances are you’ve heard of Wordle, an online word game as simple and as good as they come. Even Masha Gessen, one of my favourite authors in the past years, has taken to posting her (impressive) Wordle results on Twitter.

While it’s essentially easy to “win” the game simply by looking up the Wordle of the day, one (or at least I) can’t help but wonder if there’s an ideal word to start the game with, especially since Wordle gives you important bits of information:

Based on my primitive understanding of statistics and a GitHub repo of the 20,000 most common English words (built from Google’s Trillion Word Corpus), I’ve written some Python code that:

According to this script, something like “Saiey” would be a great starting word for Worlde – if only it were a word.

And the one word with the most likely sum of letters occuring in their respective position would be “Sauce”. 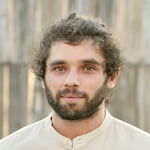 By Michail Strijov
Michail is a full-time freelance translator specialized in technical and IT translations as well as trans-creation. Learn more…